Drones have the potential to revolutionize how pesticides are applied.

They can be used in impassable terrain, allowing for precise, targeted application. The pesticide can be sprayed and individual feeding baits can be placed. The drones can even shoot out adhering material where necessary – for instance, by applying beneficial insects to the crop in question.

However, there are certain disadvantages to using drones for applying pesticides. They have a relatively low carrying capacity. They can only operate in certain weather conditions (and with enough light). What’s more, in many countries, two people are required to operate drones that exceed 20 kg in weight.

It’s worth highlighting that applying pesticides with drones is not a hobby – it must be carried out by professionals who have the expertise, accreditation and adequate insurance cover in the event that the drone causes damage.

SGS has been using drones in agriculture for years. They have historically been used to create images of plots from field trials in order to evaluate them. In some countries, SGS has also used so-called monitoring drones to support farmers with their precision farming. This approach is particularly beneficial when the weather conditions do not allow for satellite image observations during the growth stage. These drones are mostly driven by propellers or helicopter wings and are equipped with different cameras (NDVI, RGB, digital, etc.), and usually weigh less than 10 kg.

In recent years, SGS has conducted field trials to help innovation-focused pesticide manufacturers create products that can be applied using drones. Our work has played a key role in allowing these organizations to develop the right formulations and master the appropriate application techniques.

The Challenges of Using Drones to Apply Pesticides

Drones have the potential to reinvent how pesticides are applied at scale. However, there are a number of key considerations to bear in mind.

While plant protection products are normally applied with 200-400 L of water per hectare, this should only be 10 L (or even less) for drones. This is because drones have a low load-bearing capacity – using any more water would quickly exhaust the application capacity. However, by using the same amount of active ingredient but with significantly less water, the active ingredient content will be far more concentrated than normal. Therefore, less will need to be applied than normal.

As a result, the coverage of the plant parts, the distribution of the active ingredient after application, and the possible negative side effects (e.g. phytotoxicity, drift and discharge of the pesticide to non-treated areas due to drift) are all potential considerations. The spray pressure, water rate, application speed, anti-drift additives and the application nozzle are of particular importance, given that they have an influence on the spray pattern and the size distribution of the droplets.

How SGS Can Help Your Organization

SGS has carried out multiple feasibility studies to test the use of drones for pesticide application. In the first year, drones were used to apply pesticides to maize, and this year, they were used to spray cereals, winter oilseed rape and apples. The following drones were used: DJI Agras MG-1S (RTK) and DJI Agras T20.

The DJI Agras MG-1S flight program is particularly beneficial, as it allows the operator to vary the spray pressure and the flow rate. It was therefore applied on random plots in open-field conditions. The DJI Agras T20, on the other hand, can fly under predefined 2D and 3D flight protocols and was consequently used in orchards and vineyards with uneven topography, turned lines and objects in the fields. Herbicides, fungicides and insecticides have now also been added to the program.

SGS was responsible for the scenario development, the drones’ flight logs, test execution, and subsequent monitoring and assessments of the cultivated plants. No residue samples were generated. The focus was instead on the drone applications’ feasibility and performance and their influence on the cultivated plant and the environment.

The results confirm that a spray drone can indeed be used for a targeted application of pesticides, and that the impact on the crop is different to the impact that conventional spray treatments have. Closer attention needs to be paid to potential spray drift.

Drones clearly offer a number of clear advantages, but also a few obvious drawbacks. They’re highly dependent on the weather conditions and the treated area per flight is limited. When seeking regulatory authorization, a number of stakeholders must be consulted, including the relevant aviation authority, plant protection authority and beekeepers association.

Based on our experience, drones might well be used in the EU going forward for desiccation, early- summer fungicide treatments, autumn weed control and insecticide treatments. Drones can also be easily used with fruits/in vineyards and orchards, where tall plants and trees have to be treated, as they can easily reach the tops of plants and trees. We will be continuing to experiment with the use of drones to apply pesticides in 2022.

SGS Crop Science supports the agricultural industry by helping to develop new products, such as seeds, seed care products, pesticides, bio-stimulants, soil improvers and fertilizers. We have established a worldwide network of field stations and laboratories to test the effectiveness, performance and safety of these new products. SGS is a long-standing partner of the agricultural industry and has extensive experience in the practical implementation of new requirements, including new products, as shown in the example of drone applications.

The Importance of Investing in Laboratory Analysis for Greenhouse Production

Why it is important to perform regular testing to protect your plants’ health. 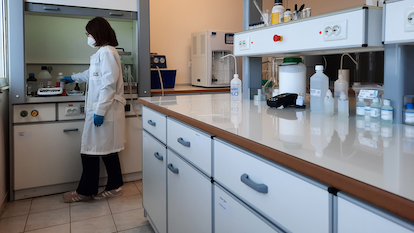 Our new laboratory in Thessaloniki will support the Greek farming industry.